The Winter Demand Response (DR) campaign was designed as a follow-up study to the previous Summer Trial, which achieved peak demand reduction and savings for customers of Japanese energy supplier Looop by optimising the design of a time-of-use (TOU) tariff and providing digital engagement tools.

Compared to its predecessor, the Winter DR campaign featured some adjustments. Looop sent participants notifications of when to take advantage of the following day’s peak periods – called “Saving Time” period – tying rewards to short-term behavioural adjustments in response to price signals. SMAP Energy assisted in delivering both programs by leveraging a suite of digital engagement tools and its proprietary AI-driven technology to predict customer behavioural response.

Why Demand Response is  Important

Throughout any given day, spikes in electricity demand can occur,  causing both network maintenance issues and increased carbon emissions as dirtier energy sources (e.g. coal plants) are turned on to meet demand. One major barrier to curtailing peak load – or electricity usage during peak hours – has been a lack of equipment capable of tracking users’ consumption during these hours. Smart meters allow for data collection at the half-hourly level – much more frequently than existing “dumb” meters – which enables insight into how much energy is consumed over the course of the day.

An increase in the number of smart meters deployed has provided a critical bridge to  offering TOU tariffs. TOU tariffs rely on charging different amounts for energy consumption over the course of several periods in the day. Critically, TOU tariffs reflect wholesale costs of generation and transmission of electricity at the moment it is used as opposed to single rates, which are set based on hedged statistical projections of yearly averages of electricity prices.

Demand Response technologies, on the other hand, enable the appropriate rewarding of customers for changing their behaviour – in this case, peak load reduction. Through a combination of TOU tariffs and DR rewards, customers can be incentivised to reduce their electricity usage during costly peak hours and energy utilities can have an array of options to employ based on their needs.

Through its smart meter installation program, Japan has successfully put in place over 50% of the country’s potential, meaning it is on track to installing one in every household by 2023. As a result, TOU-tariffs are now an effective and feasible means of achieving efficiency benefits in the Japanese energy sector.

For more information on the importance of DR and smart meter data, visit this page.

A total of 2740 Tokyo households supplied by Japanese energy retailer Looop participated in the program between the 15th January to 22nd February.

As during the previous Summer DR trial, SMAP Energy provided an energy consumption visualisation application that tied in to Looop’s existing customer engagement channels. This app was adapted for the project to enable participants to track both personal savings and team progress in the program.

Participation in the campaign was tracked solely by observing energy consumption changes in each participant’s smart-meter data –  without installing any additional hardware – through SMAP Energy’s unique data analytics platform.

As with the summer trial, participants earned points for reducing energy consumption in the designated peak periods. These points had a direct commercial value, as they could be redeemed at the end of the program for an Amazon gift certificate at a rate of 1 JPY (approx. 1p)/point.

Gamification was also employed, with the participants being divided into 3 teams and additional rewards granted for individual and team point totals.

How frequently did savings periods occur?

Over the course of the 39-day program, 273 half-hour periods were designated for Saving Times, while Super Saving Time was active for 2 hours on February 9th, 2019 (a particularly cold day in Tokyo).

How large of an energy reduction was observed?

How did participants achieve the savings?

We conducted interviews with several of the participants to understand how they changed their behaviour during Saving Times. Participants reported that they were able to accomplish all their tasks and chores during cheaper, non-peak hours, as a direct result of the reward system put in place, “We turned on the heating and warmed the room until just before the Saving Time, and turned it off during the target time”, reported one participant. Another participant said, “I turned on and off the electricity like a game with my kids”.

Combining both the SMAP TOU and DR tech packages presents a compelling solution for energy retailers to pass additional savings on to their customers with no adverse requirements for data collection or additional hardware installations. It was also predicted as having positive implications for customer acquisition, engagement, and retention, while allowing suppliers to diversify their offer in a competitive retail market.

With two trials successfully recorded, the SMAP TOU/DR apps have produced very promising results for incentivising energy-conscious behaviour and translating this into direct savings for customers at no additional cost to their supplier. Further study is needed to fully investigate the potential of domestic demand response, including the ability to strategically increase consumption at periods of high supply.

Looop has already announced a project for Spring 2019, called Reverse-DR, which will focus on matching surges in solar electricity output with increases in demand, so-called “Turn Up” events. This project will focus on incentivising consumers to shift their usage to cheaper off-peak hours, typically because of excess electricity from solar plants, which would otherwise be turned off. Customers will be awarded points for every kWh used during these periods, redeemable as Amazon Gift Cards.

“We are very excited to be developing concrete examples of how to leverage smart-meter data into applications that have sustainable, scalable outcomes. Ensuring electricity from solar farms is being used and not wasted means that we are providing benefits to both customers and the environment,” said Paul Monroe, co-founder of SMAP Energy. 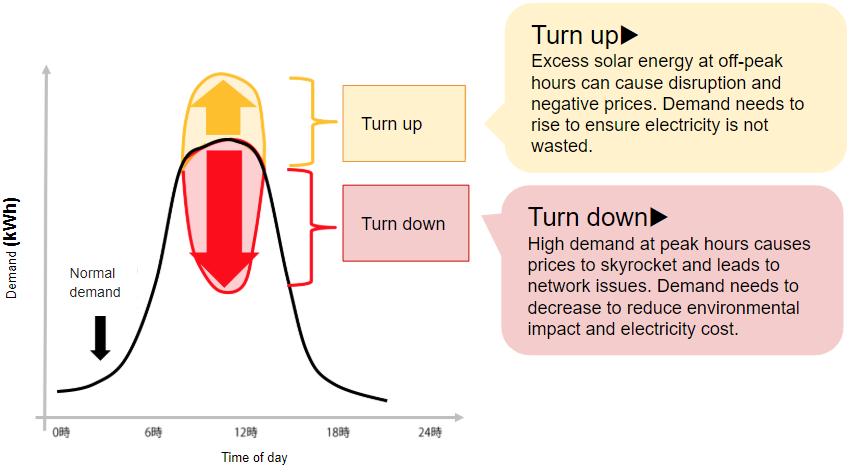 The program will run from 19th April to 19th May, if you want to find out more, contact the SMAP team at info@smapenergy.com or stay tuned for updates!

Any cookies that may not be particularly necessary for the website to function and is used specifically to collect user personal data via analytics, ads, other embedded contents are termed as non-necessary cookies. It is mandatory to procure user consent prior to running these cookies on your website.